In this thread, we're going to discuss major scales and how to play them on the guitar. This request came from @Kim La . So, let's get on the square and on the level.


W-W-H-W-W-W-H​
W stands for whole step while H stands for half-step. And what we have in the formula is the distance between two consecutive notes of the scale, in ascending order.

Since there are 7 distances there, one can conclude that a major scale has 8 notes. Then why did I say 7 earlier? Because, while there are in fact 8 notes, one of them is repeated. The note that is repeated is the first note, which is also played at the end of the scale, an octave higher than the note that started the whole thing.

4. Figuring out the notes of a scale

When it comes to a standard tuned guitar, these are the notes you can play on each string:

If we are to play the notes of the C major scale, then by applying the formula above, we would get C, D, E, F, G, A, B and we would end on C again. Kind of like this: 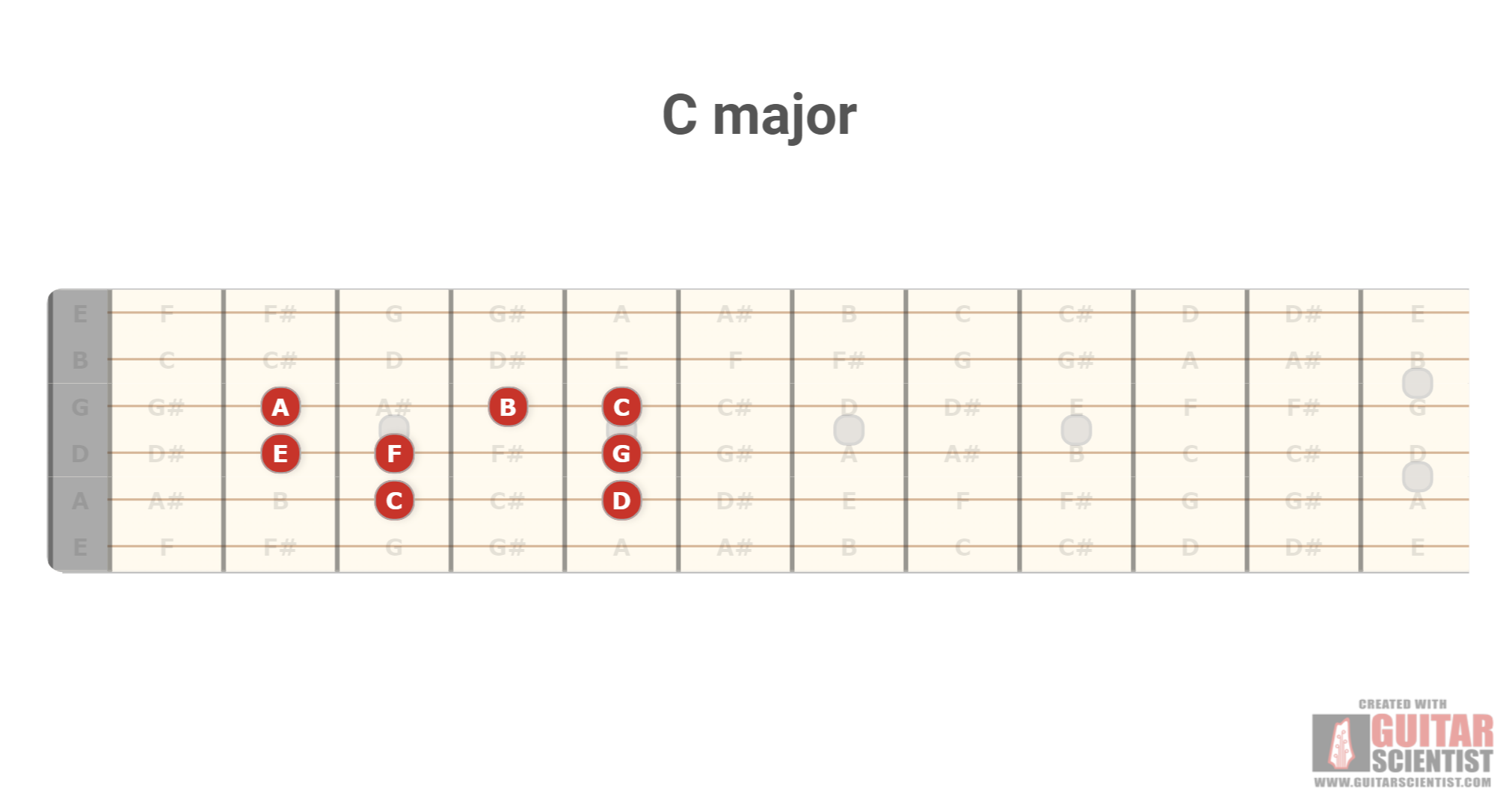 Of course, there are many other scales for you to choose from. It would be highly indicated to study the lesson the Papa Gates has on the Circle of 5ths in order to gain an even easier way to figure out the notes of each scale.

The CAGED system is based on 5 chord forms. The name of the chors are in the name of the system and they are of course the basic forms of the C, A, G, E and D chords, which look like this:

If we are to play the C chord using all these shapes, it would look like this:

In order to successfully play major scales using the CAGED system forms, you need to learn the shapes of the root chord of the scale (the chord formed on the first note), using these movable shapes. Afterwards, you just add the missing notes of the scale which are located on the frets you're not using to play the chord. Let's look at the C form for example: 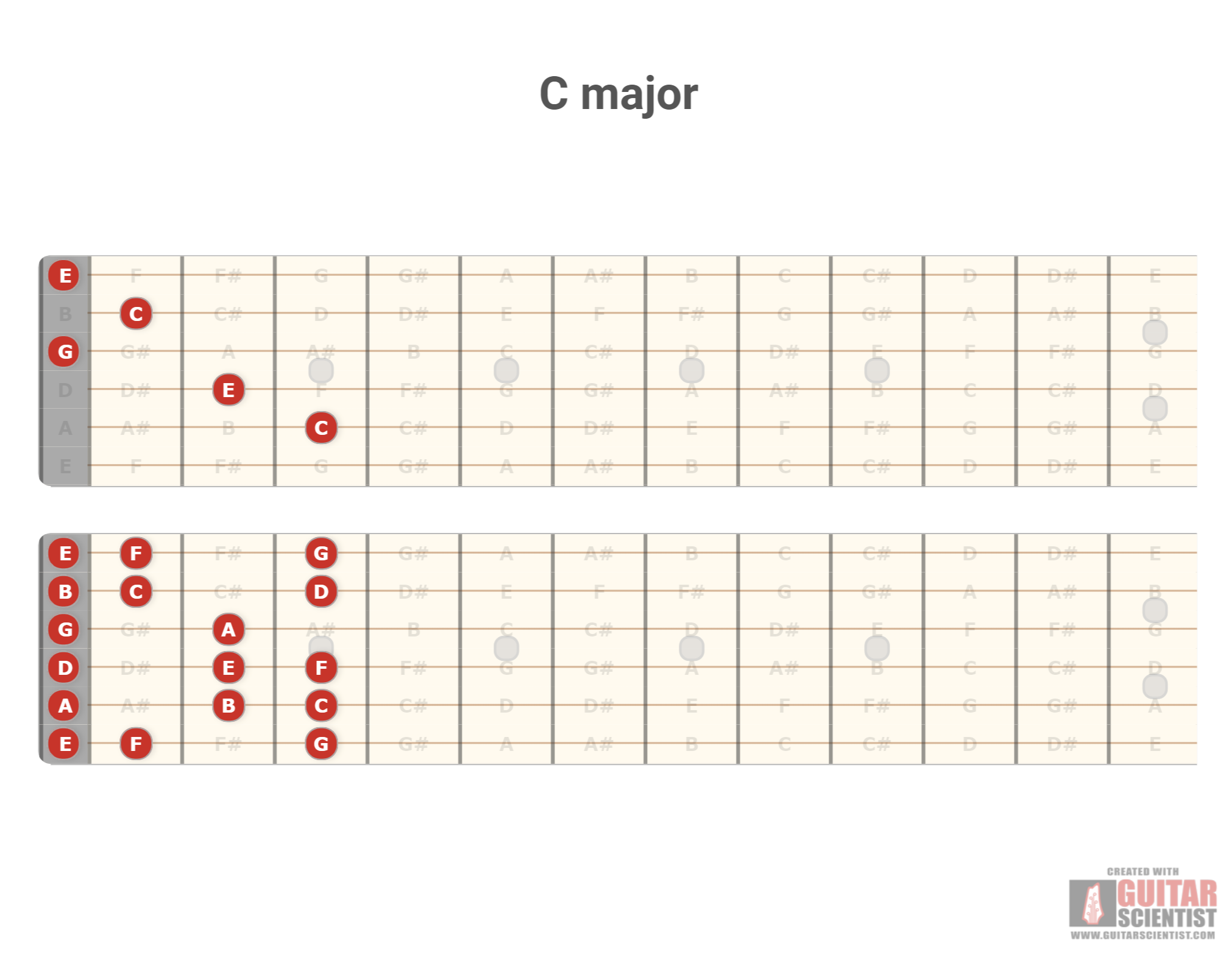 Let's move on to the A form:

Next up, the G form: 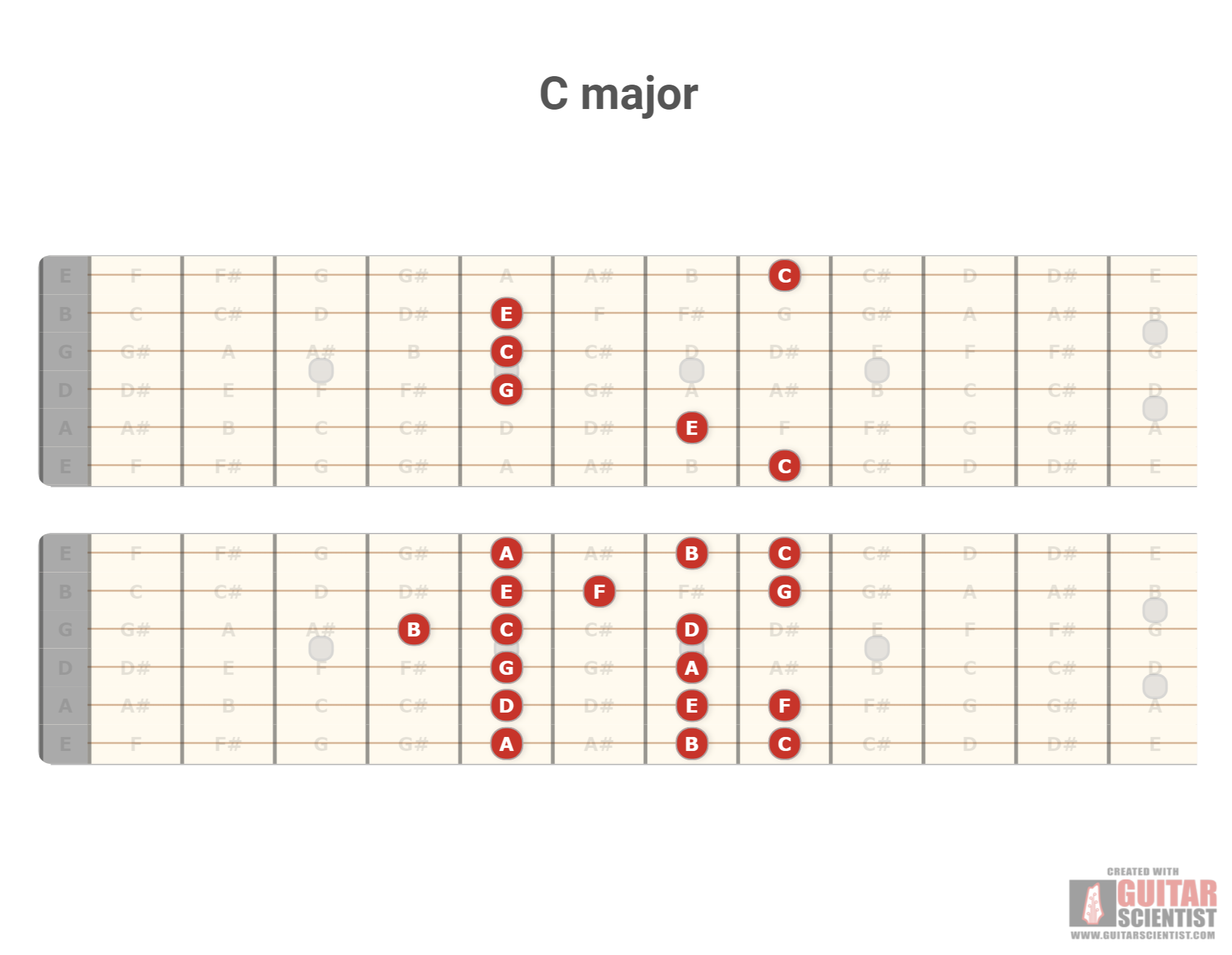 The E form is next: 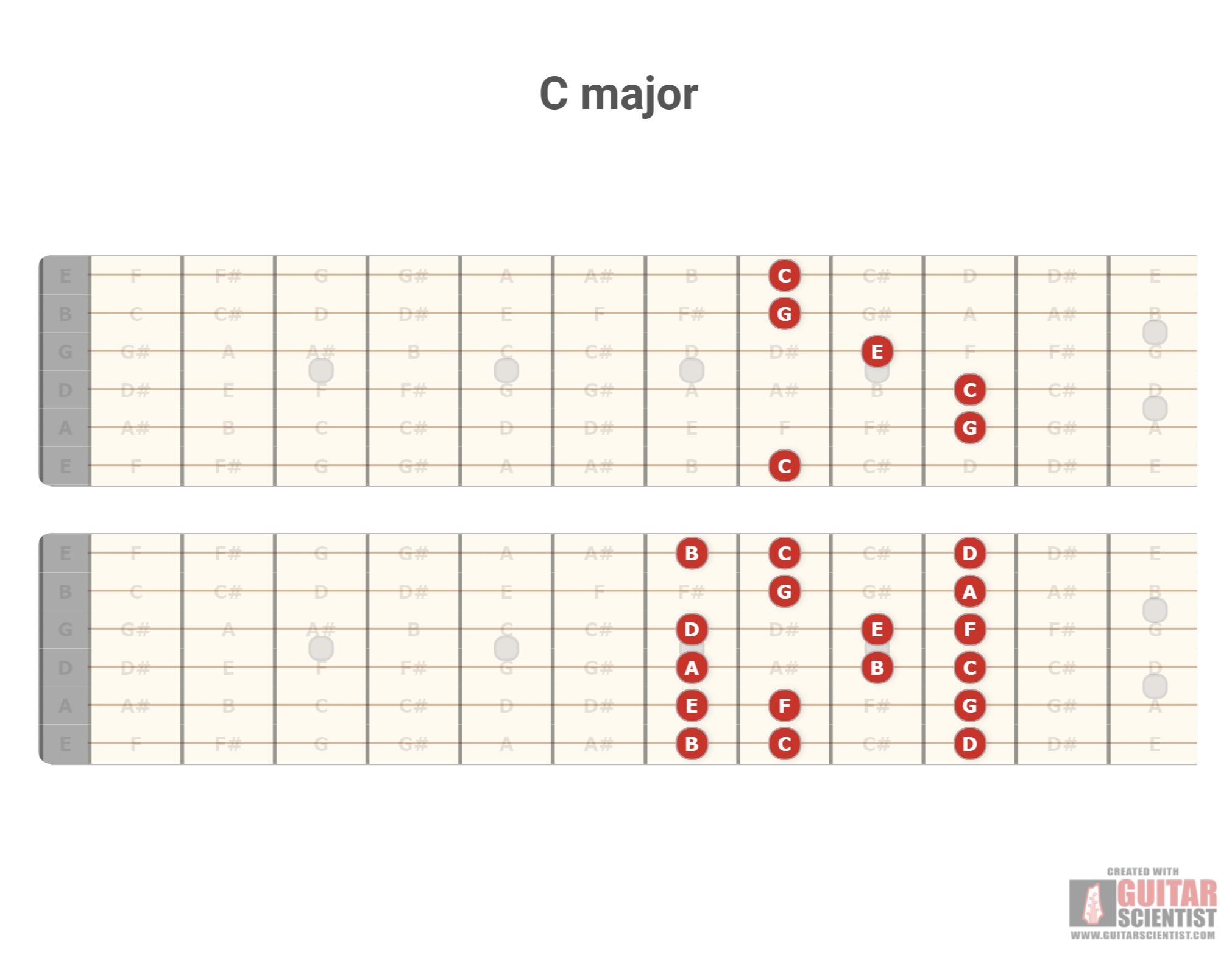 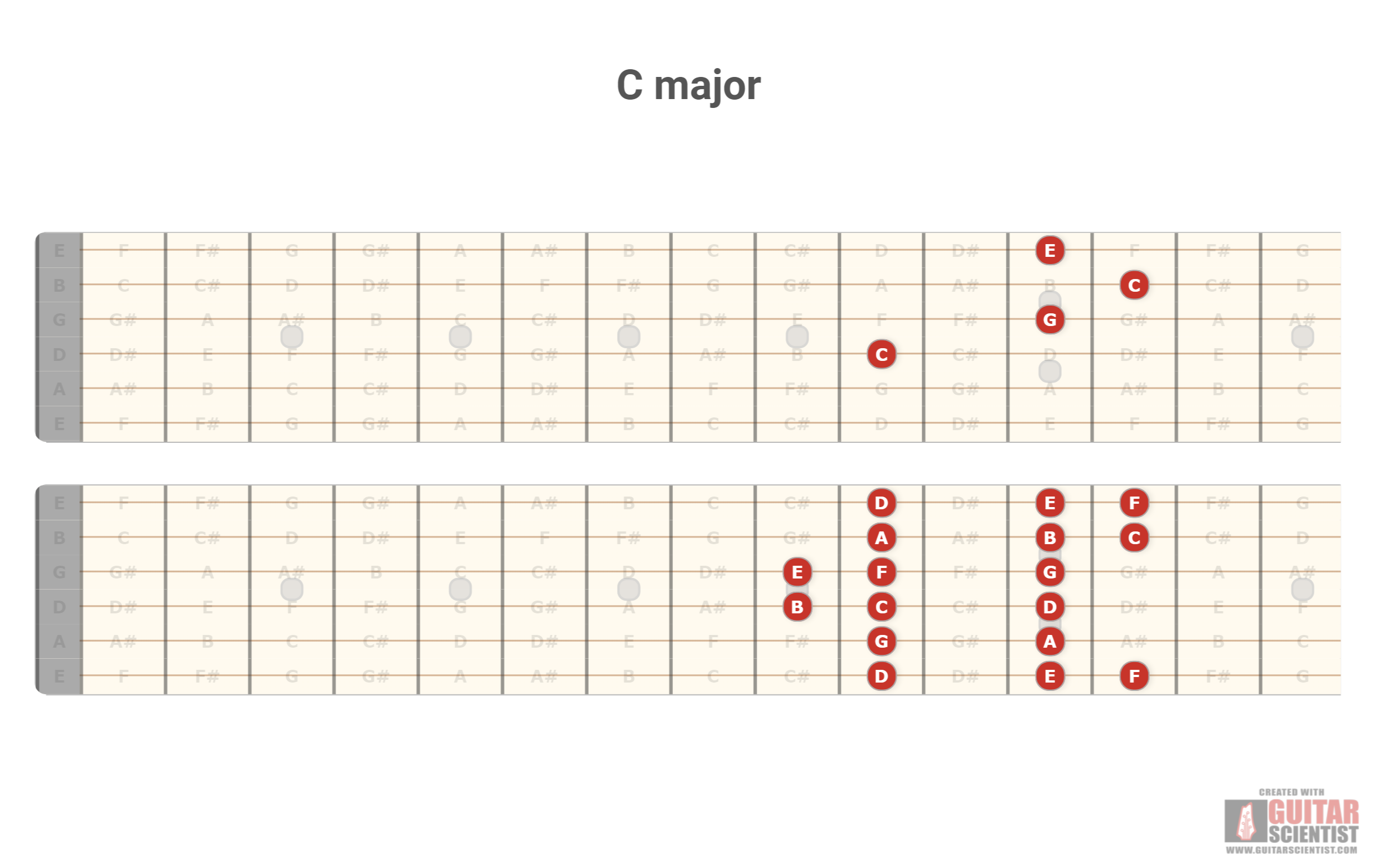 6. The 7 positions of the major scale

Papa Gates has a wonderful tutorial on this. Basically, the 7 positions of the major scale is a concept referring to you playing a major scale in 7 different ways, starting on a different note each time: 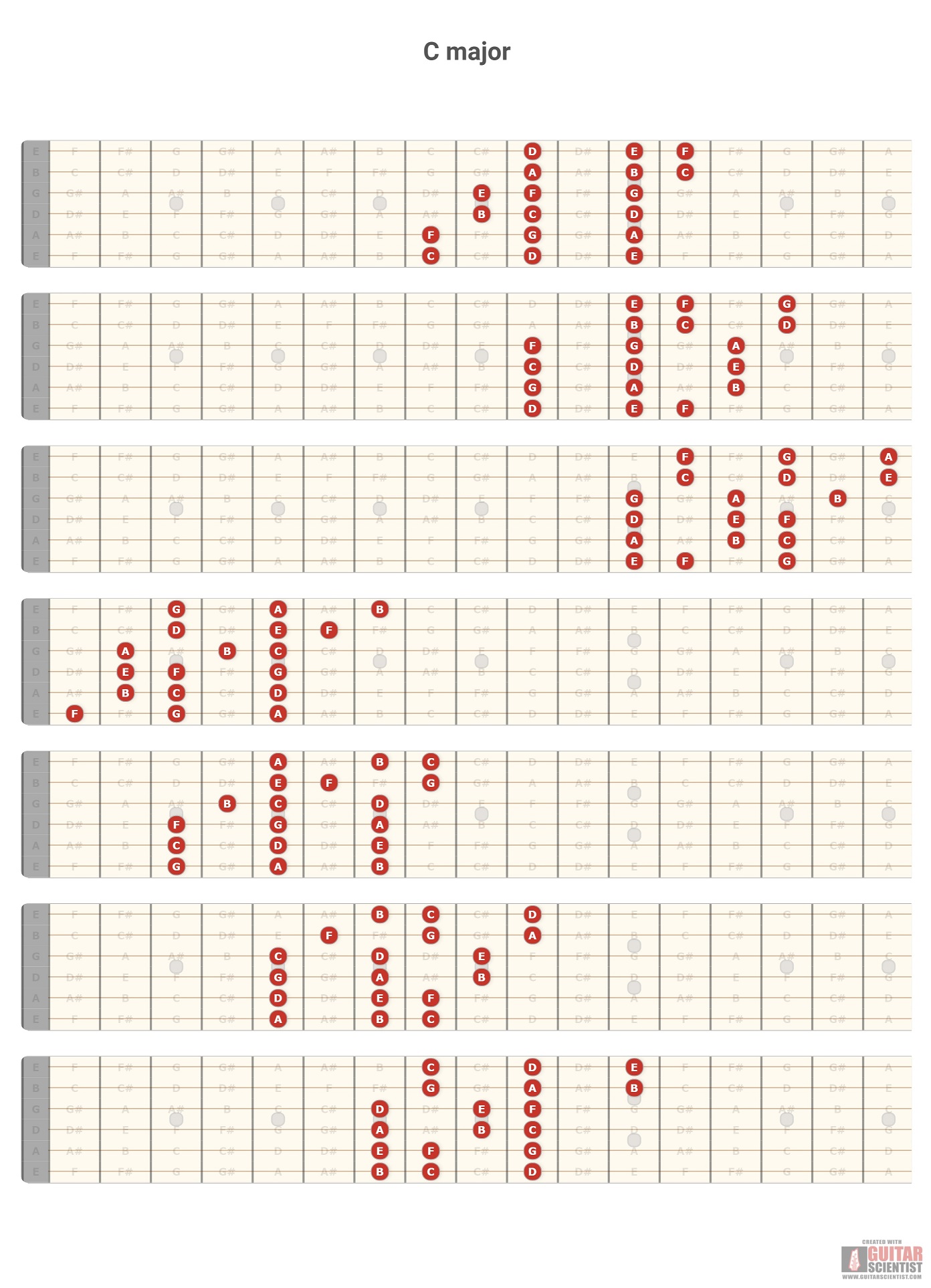 That should wrap everything up.

Andrei, this is amazing!! Thank you so much for explaining this so clear!! I think now i fully understand it (for the first time, after a lot of youtube videos and reading about it), this is the complete explaining, while on other sites/youtube sometimes they explain 1 part, this is the total package, im really gratefull for this, thanks a lot
Reactions: Anthony Peña and Andrew Milner
•••

As someone who was just working through this and trying to wrap my head around it, this is incredibly helpful, thank you!!
Reactions: Anthony Peña and Andrew Milner
•••

This is Brilliant Andrei! I had no idea that Guitar Scientist was a thing either, such an amazing resource
Reactions: Andrew Milner
•••

So, Andrei - the last example there, the 7 positions of the major scale. This is the modes, is it not?
•••

Ed Seith said:
So, Andrei - the last example there, the 7 positions of the major scale. This is the modes, is it not?
Click to expand...

Yeah, that is correct. They are the 7 modes of the C major scale. They're in order: Ionian, Dorian, Phrygian, Lydian, Mixolyidian, Aeolian and Locrian.
•••

So, in this case, would it be, for example, C Dorian or D Dorian in that second position? D, right?
Reactions: Chris Johnston
•••

Ed Seith said:
So, in this case, would it be, for example, C Dorian or D Dorian in that second position? D, right?
Click to expand...

It would be D Dorian. C Ionian is the major scale. So the order is C Ionian, D Dorian etc.
Reactions: Ed Seith
•••

Okay, so what makes it D dorian is that it's the second mode of the C major scale. So if, for example, we were working with the D major scale's second mode, that would be E Dorian?
Reactions: Anthony Peña
•••

Ed Seith said:
Okay, so what makes it D dorian is that it's the second mode of the C major scale. So if, for example, we were working with the D major scale's second mode, that would be E Dorian?
Click to expand...

Exactly. The Dorian mode is always formed on the second note of the major scale.
Reactions: Anthony Peña and Ed Seith
•••