Hello there, I really hope it will help some of you who are not familiar with this… it is a little brain exercise to figure out intervals. I had a very hard time following all those youtube lessons and basically every Rick Beato video, about theory, scales, chords and intervals, just because I was not able to do the math in my head. Knowing the 1 – 3 – 5 in any key, the chord tones etc… so I sat down with pen and paper, writing down the intervals in every possible way on fretboard and trying to figure out ways to know it instantly without guitar, without anything, just saying a note and come up with answers what is the major second? Minor second, fifths, sevenths etc… and how to figure it out fast without counting up and down the scale… and of course being able to play it on the guitar and use it in lead. so here is how I do it now… I hope it makes sense and that it will help.

First thing to know is the formula 1 – 3 – 5 . It is the first, the third and the fifth note in the major scale. When it comes to major triads, major chords, it is always 1 – 3 – 5, you go to sleep it’s onethreefive, you get up in the middle of the night to pee it’s one.three.five… even when you eat your breakfast or walk your dog, it’s one. three. five. when you watch tv, it's One.Three.Five. It’s not One.Tree.Hill. It’s ONE.THREE.FIVE

Now let’s find the major third of A. That is the 3. It involves a bit of counting, but it gets easier and faster the more you do it.

One way you just go up to the third letter, let's say F is the root, go up F G A... A is the major third.
but if there are no sharps or flats between, then you sharpen the third note.. There are no notes between E - F and B - C. These are the only places. So if you the root is A, go up A B C, but because between B and C there is no note, sharpen the C, becomes C#, as the major third of A.

The first three notes of the major scale have 1 empty fret between them, so just leave out every second fret, and you can get to the major third in no time in your head… just imagine this picture that I stole from guitar pro 7:

So which is the major third?

It does not matter, which note you start on. In key of D, the root is D, the major third is F#.

So just do this in your head next time on the bus, at work, before sleeping, under the shower, or while your drunk uncles are debating politics and solving all the major problems of the planet at a family dinner:

Done, awesome, congrats, now be proud at yourself, then pick another note, and repeat until you can do this as fast as... I don’t know, very fast.
So now you know the 1 and the 3.

Now there is an exception, but easy to remember: 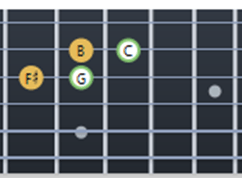 So only the fifth of F left, which is a C. As a reference can be an F5 chord, or above the F note there is a C (except on G string).

Now all the 1 – 3 – 5 can be figured out easily and fast with a little bit of mental exercise. Of course, like everything, it needs to be practiced a bit, but you can do this anytime anywhere… and you should! Because if someone runs up to you on the street and say he/she will kill you if you don’t tell immediately the onethreefive of the B, now you will be able to tell it and it can save your life. De nada

Where is the major seventh? 1 fret below the root. Always. Forever.

The major seventh of E is D#.

The major seventh of B is A#.

The major seventh of C is B.

The same applies to minor triads, minor chords… just flatten the 3 and 7, the fifth is the same.

The b3 of D is F. Again, remember this nice small pattern. 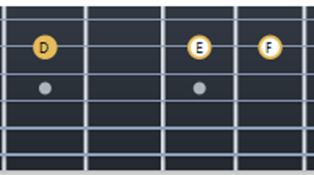 Again, I really hope I managed to write this down clearly and that it will help.

Beginner Soloing using arpeggios and scales in the same key