Behind the Lens - Photography Thread!

So, as a few of you might know, when I'm not playing a guitar or working on art, I'm often found glued to my camera. Because of this, I figured that I would make a thread to share some of my own shots and encourage you all to do the same, if you feel so inclined! Sure, it's fun to be in front of the camera as many musicians and artists want to be, but behind behind the lens is, in my opinion, just as fun if not more!

To kick off, I thought I would share two shots from my most recent gig on May 24th, featuring Defects and Bullet For My Valentine. I'll tell you a little bit about what I did, where I was, all that fun stuff! I will add, this was the first time I'd shot a "big" band, and probably the third or forth time capturing a live gig like this, so I've definitely got a long way to go, but it's the journey that matters.

So first off, we have Defects! Technical details first - I use a Nikon D3200 with the most basic 18-55mm auto kit lens you can find, and this will most likely be the case for a while until I get an upgrade . For this shot, I had 1/125s shutter speed (fast enough to get mostly clear shots without removing too much light), ISO 800 (makes dark photos brighter but oh dear lord the grain, as you may have seen) and an aperture of F4.5 (I would've much preferred around 2.8 but gotta make do - Lower is better in dark situations, from my experience). Finally, I edited in Lightroom and ended up making a whole bunch of presets for this gig that I'll most likely never use again . I didn't have a photo pass, rather I waited all day to make sure I got barrier, and shot from the crowd. There wasn't too much shoving this early on into the set, so I was able to get plenty of shots and most came out nice and clear-ish. The red and blue lighting was a bit tricky to adjust to at first, as it tended to remove a lot of the detail on the faces and arms compared to the clearer, white lights. However in some circumstances like this one, it did lead to my favourite contrast ever (if you've seen my IG... you know what I mean). Overall, these guys were fantastic! 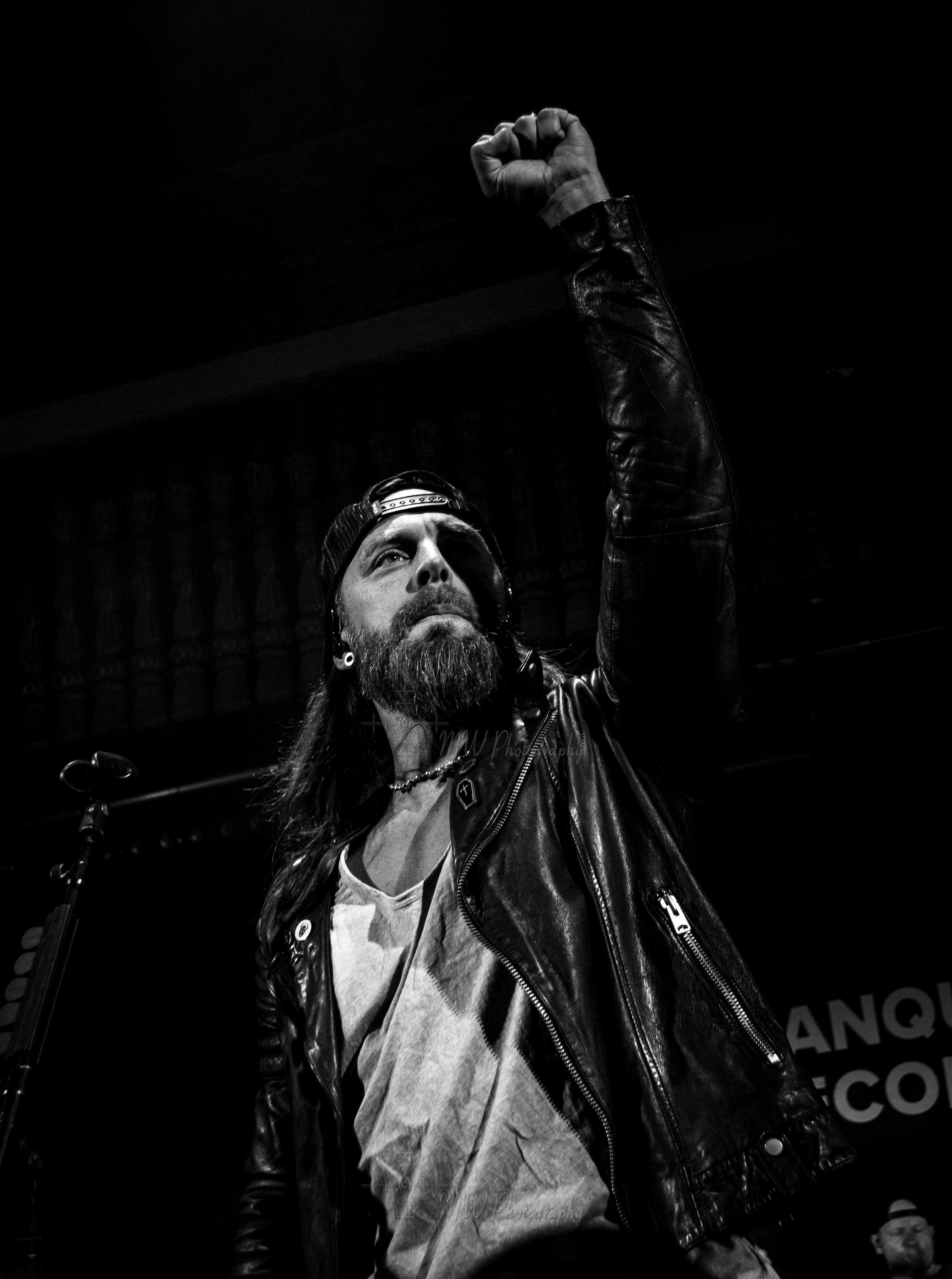 And finally, we have what is currently my favourite shot from BFMV! Technical stuff - Same camera, same lens, slightly faster shutter speed of 1/160s (their lighting was slightly better overall as they used the bright lights much more often, so I could increase the speed and still get clear shots), same ISO of 800 (this did vary between 400 and 800 throughout the night, depending on song/lighting), and same aperture of F4.5 (I didn't touch this during the gig.) Taking photos during Bullet's set was much more of a challenge. Between the moshers crushing the barrier, crowdsurfers coming in overhead and security standing in *just* the wrong place (no disrespect, they were all fantastic at their jobs, just unfortunate on my part) I had to try time everything the best I could. This shot was just after their first or second song, so before all the chaos took place, and the lights just happened to go up right at the perfect time for a clear shot of Matt Tuck. Later on, I'd end up being whisked out of the crowd due to a neck injury, but all is well and it was worth it!

So yeah, that's what I have to share for now! I'd love to hear any feedback or comments, and even more so, I'd love to see you all share your own photos, whether they're taken on your phone or on a camera (OR, if you're absolutely mad, on a 3DS. I've seen you people out there and I respect you

). They don't have to be gig related either - Just any nice photos you'd like to share and talk about! I'd love to just share some appreciation of photography with everyone because it truly is a wonderful art and I feel sometimes it can get a little overlooked despite how often we consume this kind of media!

Finally, I plan to do a SynTV stream at some point in the near future where I edit a few photos with you all! I don't have a date set for this yet, but once I do, I will let you know!

Oooooh you will present the photos from BFMV show on stream ?

Saphyra said:
Oooooh you will present the photos from BFMV show on stream ?

Absolutely! I'd be more than happy to show a few more of them and maybe also walk through how I edit them!

Man that is awesome !!
Unfortunately I can't go to the the show for the Hellfest but I am going to the Gojira show at the Hellfest (I could take a 1 day pass XD)
Reactions: Matt Wildcat
•••

Thank you so much, PG! It's been a real challenge for sure, but I think I'm making good progress now!
Reactions: Brian Haner Sr.
•••

Thank you Captain! I'll have to show you a few of the others very soon

I’m no professional photographer by any means, but I do enjoy going out and snapping some pictures wherever I go!
Here’s one I took of Syn and Matt back in July 2017. Very end of the set, at the end of Unholy Confessions 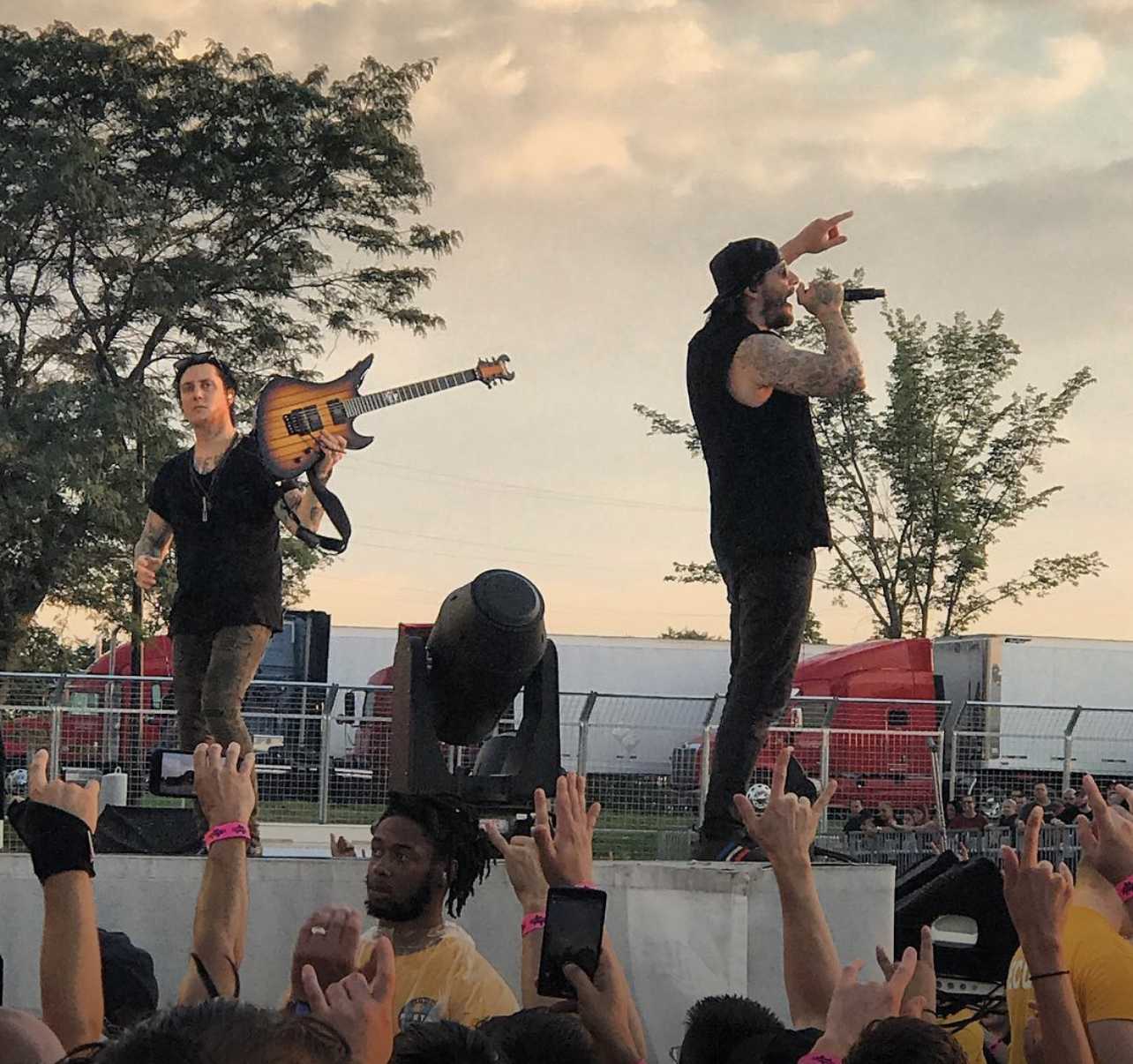 Jeremy Healey said:
I’m no professional photographer by any means, but I do enjoy going out and snapping some pictures wherever I go!
Here’s one I took of Syn and Matt back in July 2017. Very end of the set, at the end of Unholy Confessions

That's a fantastic photo, Jeremy, thanks for sharing! What did you use for this, just your phone I assume? It's amazing how great phone cameras have gotten tbh
Reactions: Alicia Willis
•••

Matt Wildcat said:
That's a fantastic photo, Jeremy, thanks for sharing! What did you use for this, just your phone I assume? It's amazing how great phone cameras have gotten tbh
Click to expand...

The cameras in phones have come a long way indeed! I just use my iPhone 13 pro, even though I have a DSLR. Much more convenient.

pretty sure this photo was taken with an iPhone 7
Reactions: Alicia Willis and Matt Wildcat
•••

Jeremy Healey said:
The cameras in phones have come a long way indeed! I just use my iPhone 13 pro, even though I have a DSLR. More more convenient.

pretty sure this photo was taken with an iPhone 7
Click to expand...

Damn, that's fucking awesome. They really are more convenient, might have to invest in a new phone just for photos

I do mostly nighttime and nature photography

Aightball said:
I do mostly nighttime and nature photography
Click to expand...

What a beautiful photo! I've always been absolutely fascinated with nighttime photography, but I have no idea how to do it

Keep it up, I'd love to see more!
Reactions: Aightball
•••

My shots are mostly while I'm out and about here in Southwestern Tennessee. This is one of my favorites. I captured the sunset just perfectly through the trees.

Aightball said:
I do mostly nighttime and nature photo!
Click to expand...

Aightball said:
I do mostly nighttime and nature photography
Click to expand...

Ladywolf said:
My shots are mostly while I'm out and about here in Southwestern Tennessee. This is one of my favorites. I captured the sunset just perfectly through the trees.
Click to expand...

Guitar Is there any Schecter Synyster Special with Sustainiac?

The most listened musician: Kevin MacLeod!

Take your time and enjoy the process

T
Dealing with anxiety and lack of motivation